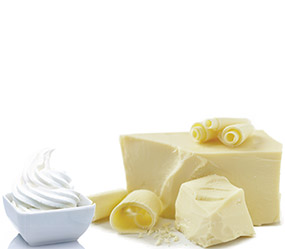 made fresh daily in Sydney

Sicilian almond, crushed amaretti biscuits and a touch of hazelnut from Piedmont are enriched with caramelised almonds to achieve an amazing flavour for almond lovers.

Based on the traditional Italian chocolates that go by the same name, which were invented in Turin in the late 1800’s.

Dark chocolate gianduia gelato which imitates the multi-layered Cremino chocolate from Turin. Rivareno makes this inimitable flavour with layers of pistachio cream throughout.

Intense pistachio made mainly using pistachios from Bronte, Sicily. The amount of skins used, and degree of roasting is all specified by Rivareno.

Straight from the streets of Sicily, this refreshing flavour is based on the traditional delights from Sicilian pasticcerie. Rivareno's interpretation is made with sheep's milk ricotta and Calabrian lemon peel

The goal of the “Laboratorio Italiano Rivareno” (I.e. the Rivareno Italian Gelato Lab) is to serve to our customers not just a simple gelato, but an authentic Italian Sensorial experience. Our Italian gelato is ultra fresh and produced daily using traditional recipes – but whilst we respect tradition, we constantly search out new recipes. For this reason our gelato production lab is committed to maintain very high levels of quality, freshness and genuineness.

“No flavour becomes a Rivareno flavour unless it passes one simple test: blindfolded, with no prior knowledge, one should be able to pick the flavour immediately.”

Gelato made fresh daily, made with care and with passion: this is the secret which makes our products unique.

Where it all began… 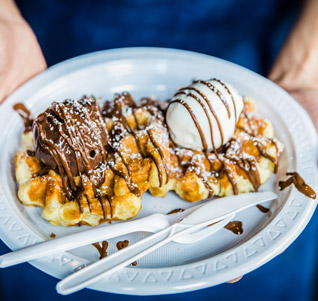 Do you want someone to have an amazing gelato experience at Rivareno? Gift vouchers are available to purchase in store starting from as little as $20. They can be used in multiple gelato sessions within the expiry period giving the gift recipient flexibility to use the voucher up when they like.

Let Rivareno bring our gelato to your event! The gelato cart hire is perfect to refresh and sweeten any event, party or celebration.
GELATO CART HIRE »

"What does gelato do when it gets scared? It melts!"

"When your dead you’re dead. And until then there is ice cream"

"A cone of gelato is able to resolve any problem, even if for only some people"

"We are not confident in our ability to make our house pleasant for guests, so we buy gelato."

"To not appreciate gelato means you are indifferent about food"

"Gelato is my consolation it rewards me for every injustice and sweetens my mouth."

"The one simple word ‘sorbet’ embodies an entire world"

"Oh sweet sorbet, precious and delicate nectar, blessed in the person who invented it"

"There are two things that matter in life: gelato and hot love"

"Laughter is brightest where gelato is best"

"Without gelato there would be darkness and chaos"

"Happiness is... wondering in the rain eating a gelato"

"Gelato is always an option"

"Tomorrow we can eat broccoli, but today is for gelato"

"Life is like a gelato - enjoy it before it melts"

"One of the very nicest things about life is the way we must regularly stop whatever it is we are doing and devote our attention to eating."

"Gelato is exquisite - what a pity it isn’t illegal"

"Life is like a gelato cone, you have to lick it one day at a time"

"The best times for gelato is ALWAYS"

My head says go to the gym, MY HEART says eat more gelato

Every day should start with coffee and end with a gelato

You can’t turn water into wine, but you can turn gelato into breakfast

Do not hesitate to write to us!

Come and visit us

We are waiting for you in one of our Rivareno shops to offer you a unique experience: find your closest gelato shop, try our gelato made fresh daily and dive into our world made of heavenly frozen goodness.

So many
flavours on offer!

The  Rivareno gelato lab has created hundreds of different flavours to satisfy all your taste desires. Is there something missing? Suggest a new flavour to your Rivareno shop: we will create the perfect gelato for you!

"Simply the best ice cream I have ever had"

The most DELICIOUS way to cool down…⁣ ⁣ #riv

WE ARE HIRING! ⁣ ⁣ We have various positions a

LYCHEE SORBET ⁣ ⁣ One of our absolute faves…

MENTA STRACCIATA ⁣ ⁣ Shout out to all the mint

Just a little something to help you get organised

Survey: What is your favourite flavour?

Want to join us?

Apply for a job

Omg. DELICIOUS! My Salted Caramel and Black Sesame cone was gone in SECONDS! I’ll definitely be going back for more!

I think I was served by the twin brother of Charlie Sheen and Mark Wahlberg. Ice cream is amazing too.

Swap ur diabetic meds for the sweetest treat on the street – st vinnies hospital staff recommend this as an endorphin raising feat! 🙂

This place is AMAZING! Id highly recommend the best selling ice cream! I cannot recall its full name so I’ll avoid using it but it’s a beautiful hazelnut ice cream which I always go out of my way to purchase when I’m in sydney

I’m hooked and can’t wait to have more! The best gelato in Sydney. Tried the Bacio – was delish! Will definitely try their dark chocolate next time.

Best gelato in town. I regularly go to both locations, Barangaroo and Darlinghurst and their gelato has become an after dinner staple. Creamy and flavourful, the pistachio, yoghurt, and cocco are to die for.

This gelato shop is very nice for service because the clerk told us his recommend matching to our feeling.

Always the best Ice cream in all Sydney but y need to go before night.. coz they run out almost of everything. Always busy! Best Italian ice cream

Rivareno Gelato - a decade in review

Almost 8 years ago, Kieran Tosolini opened the doors at Rivareno Gelato at 280 Crown Street in Sydney after a 2 year search for the perfect ...